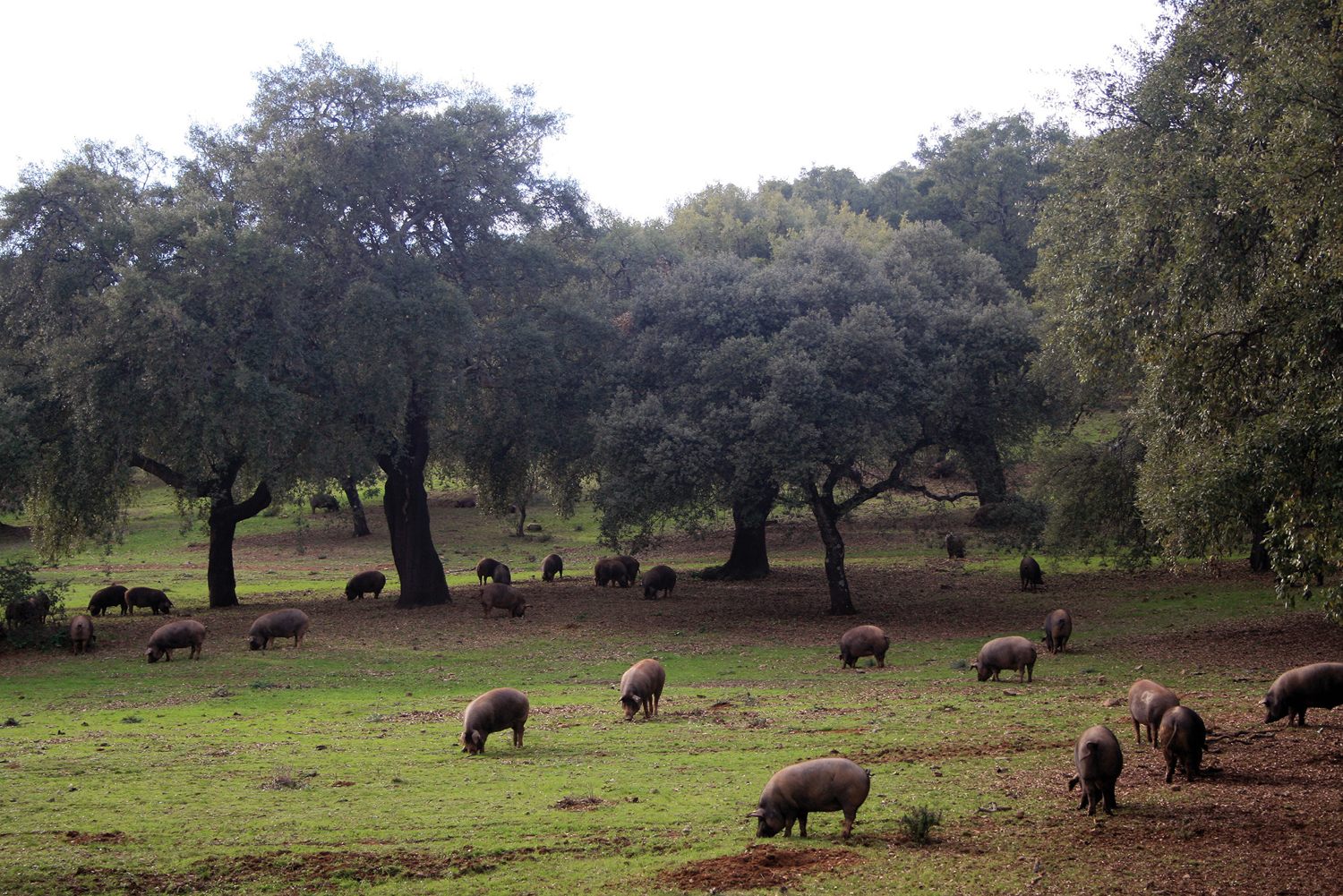 To study the history of the pig in the South, we must start in the rolling pastures of Spain—the dehesa. The dehesa is a combination of grassland and oak savannah found in Spain and Portugal and is known for producing cork and charcoal from the trees as well as the famous fighting bulls from the pastures. But, the most treasured product from the dehesa is jamón ibérico, or as we know it, the cured ham from the black-footed Iberian Pig. Jamón ibérico is the end-product  of pigs that have fed on acorns from the cork oaks of the dehesa. When cured, the meat has an intense flavor. The Spanish are passionate about their pigs and this can be easily seen as it is woven throughout Spanish culture.

In addition to being tasty, pigs are also portable. Wherever a Spanish ship sailed, it carried pigs. The pig was a great benefit on ships as the animals were hardy and compact, the meat could be cured and stored easily, and pigs reproduce quickly. Both the Spanish and Portuguese developed a habit of not just carrying pigs on the ships, but also dropping off breeding pairs of the animals on small, uninhabited islands. There the pigs would multiply and provide a source of food whenever the ship returned.

By the late 1400s, the Spanish had conquered the Canary Islands off the southern coast of Morocco. They found a breed of pig already existing there, the Canarian Black. This pig was descended from Asian animals spread from the Middle East through Africa, while the Iberian pigs of Spain were products of several thousand years of European breeding. The Canary Islands became very important around this time as the trade winds allowed quick passage from there to the New World since most Spanish ships made a final stop in the Canaries to stock up on water, food, and of course pigs.

The first pigs were brought to the new world by Columbus on his second voyage. While Columbus was not Spanish and therefore not so inclined to all this pig business, his patroness  Queen Isabella of Spain was, and she ordered him to take some pigs. So, in 1493 Christoper Columbus brought 8 pigs to the island of Cuba. Other explorers brought pigs to Bermuda, the Bahamas, and many other islands. One island of interest is Ossabaw Island off the coast of Georgia.

Near present-day Savannah, Ossabaw Island is 26,000 acres of forest and wetlands. On this island, you can still find pigs descended from those left by the Spanish explorers. The Ossabaw Island Hogs, as the breed is now known, have remained unchanged by anything other than natural selection for hundreds of years. Genetic testing has shown high percentages of Asian DNA, indicating that the foundation stock of these animals are from the Canary Islands before the Spanish had introduced many European bred pigs there. These animals are living time capsules, allowing us to not just see into the past, but taste it as well. The Ossabaw Island Hogs are revered by chefs such as Charleston’s Sean Brock whose restaurants Husk and McCrady’s often feature Ossabaw pork.

In 1539, Hernando de Soto brought 13 pigs to Tampa Bay, the first swine in mainland America. By now the Spanish were improving the Canary Island pigs by adding more European DNA from their black-footed Iberian pigs in an effort to increase the meat quality. This led to a new breed of pigs called Red Guineas. (Guinea having a double meaning here, both anything small or from Africa, such as the Canary Islands, was often called a guinea.) Both the red and black Spanish were successful in the new world, maybe too successful. Many of the animals escaped into the wild and reproduced quickly. These became what we would know as razorbacks or piney wood rooters, the wild hogs of the South.

But the Spanish were not the only people exploring and colonizing the Americas. In 1607 the English brought pigs to Jamestown Colony, Virginia. English pig breeds were more refined than those from the Canary Islands having been bred into different types such as lard, ham, and bacon pigs, and while not as wild and hardy as Spanish breeds, they were often much larger. As the Spanish and English both spread into this new world they brought pigs with them and eventually they and their pigs met.

When the tough, robust Spanish Red Guineas bred with the English Essex lard-type pigs, the resulting breed was compact and tough but also docile. This combined with their smaller size made them more “kid-safe”. They were just the right size for a family to keep out back, keeping the yard free from dangerous snakes while getting fat on acorns and food scraps. The resulting breed is the American Guinea Hog.

Meanwhile, along the gulf coast, the Spanish-bred pigs were still going strong. Earlier imports had been quickly adopted by Native Americans who loved the taste of pork (my native American friends tell me this is still true today) and quickly adopted the practice of raising pigs in a more free-range environment with very little care. The semi-wild pigs proved so successful that settlers began using them as well as the free-range style of raising them and spread not just along the gulf coast but up the Mississippi Into the corn belt. At least two surviving breeds came from this ancestral stock, the large single-hoofed MuleFoot Hog and the small Choctaw Hog. Like the Ossabaw Island Hog and the American Guinea Hog, both of these breeds are critically rare today.

In the 1800s the Duroc hog was created in New York and New Jersey by breeding the Red Guinea type hogs with large and long English bacon pigs. This proved very successful and eventually replaced the red guinea in the south leading to its extinction. If you’ve ever seen a red hog in the South, chances are you saw a Duroc since they are still popular to this day.

The pig is the quintessential Southerner: tough and adaptable, in many different colors, shapes, and sizes, and always charming. 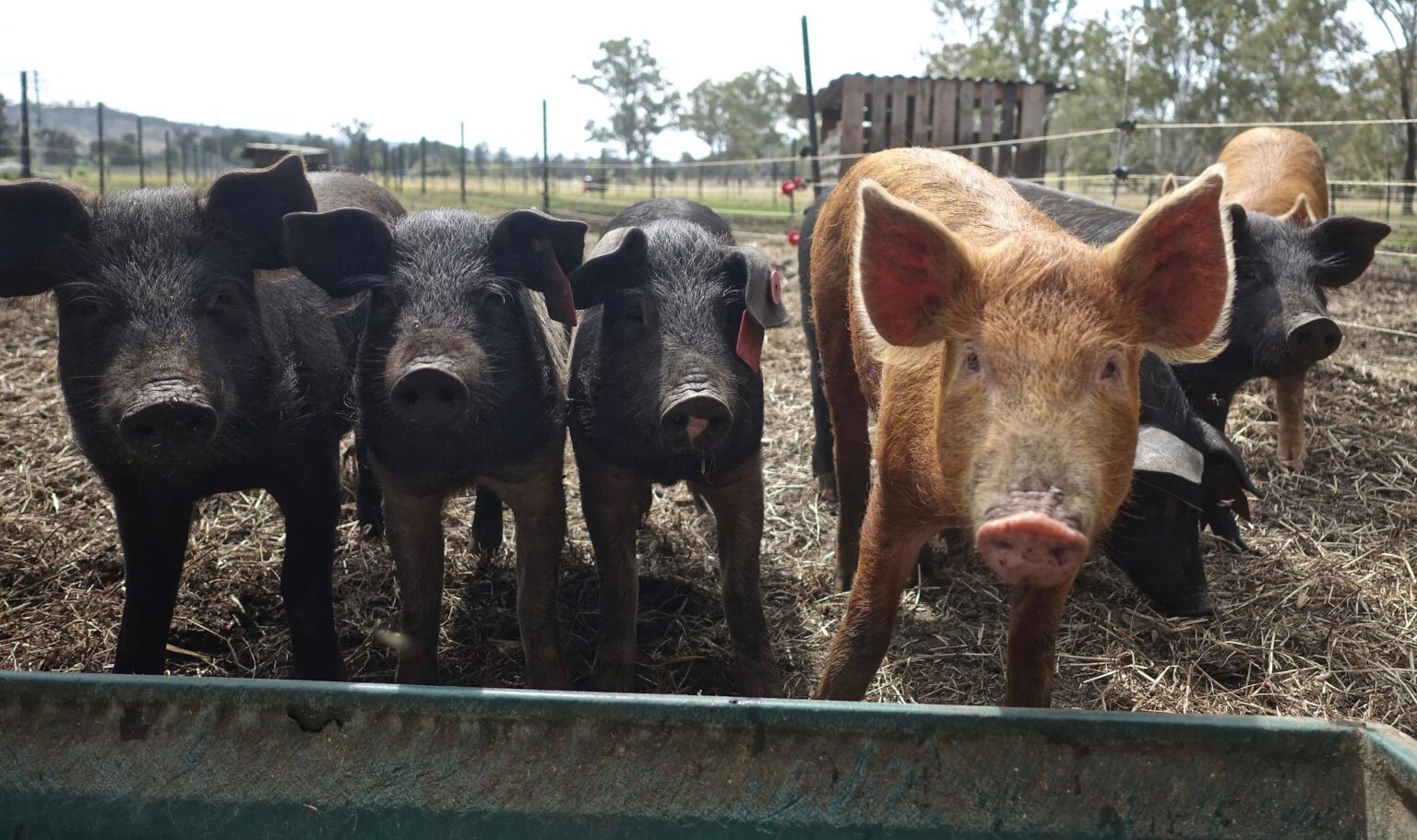 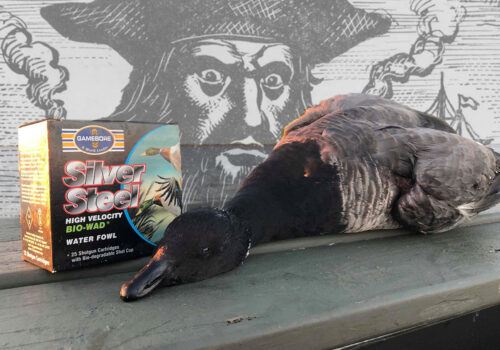 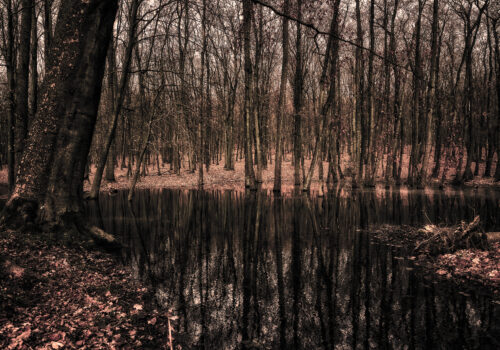 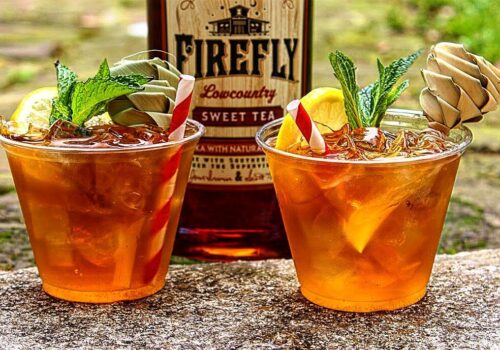