Living in North Carolina my entire life, I am not sure how I spent a lifetime, no more than two hours away from Bald Head Island, and never managed to discover this amazing treasure. It is truly one of North Carolina’s best-kept secrets. It has a look about it that makes you feel you are on an exotic island in the Caribbean….or maybe even The Hamptons, but with charm and beauty that only the south can provide. Well, let’s face it – I am biased to southern hospitality. I have always had a love affair with the coast of North Carolina, but this little gem has deepened that love just a little more.

Growing up in eastern North Carolina, I have heard whispers of Bald Head Island, of how there are no cars on the island and how you must take golf carts and bikes to get around. I always thought this sounded kind of intriguing, but again these were only whispers. I have always thought of Bald Head Island as a private island, only to be discovered by invitation. While this concept is absurd, this is not a place that boasts about itself or markets to tourists in abundance. Once you see the beauty for yourself you will understand why.

I was on a day adventure in Southport, NC (which is an amazing story all on its own) and I decided to see what all the fuss was about in Bald Head Island. I tossed Shadow (my beloved brindle pug) in the car and set off only two miles to the Deep Point Marina. As I pulled up at the Marina, the feel was immediately different – like I had just landed in another place – like I was already on “island time”. Travelers were unloading luggage, bikes, and beach chairs, almost every family with their dog in tow. As I stood on the dock waiting to board the ferry, families were all talking to one another – talking to other families. Children were meeting new friends, asking one another where they were from, how long they were going to stay, as they planned to meet on the beach once they arrived. Many people came over to pet Shadow, asked me about him, where we were from, and went on to share a little about themselves as well. I felt like I had stepped back in time, before cell phones and wifi, when vacations were a time to bond with family and make new friends!! As I boarded the ferry, I was even more anxious to see what was in store for me at Bald Head Island! 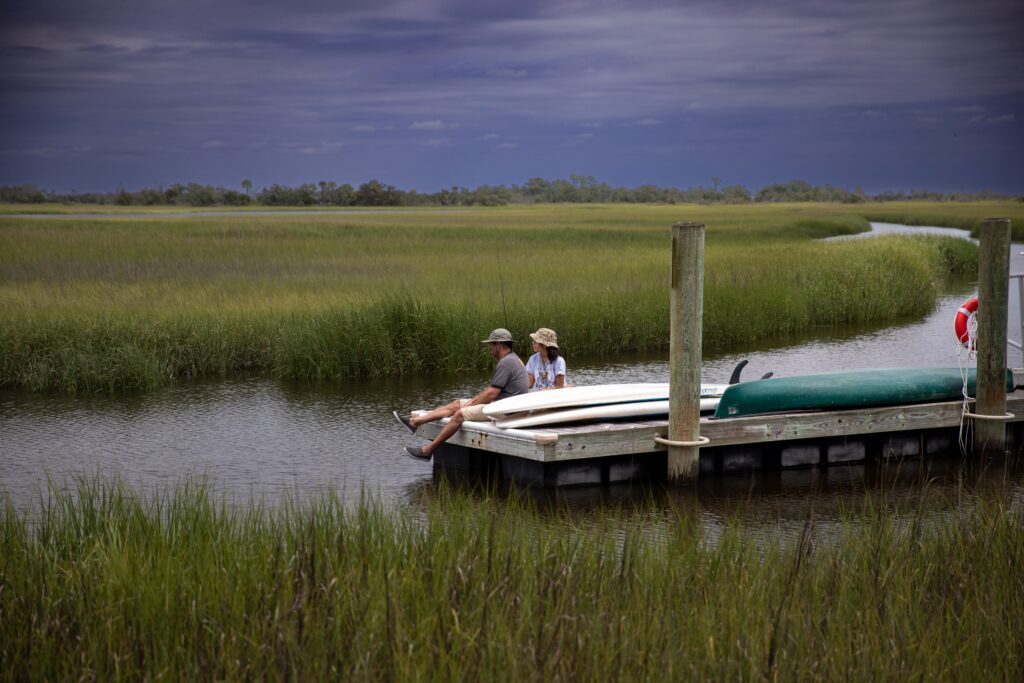 Once on the ferry, everyone was still chatting and enjoying the great company – other than a few teenagers, I didn’t really see anyone with their phones. The family next to me and I talked – they were from the triangle area near Raleigh – about three hours from my home in Emerald Isle. We learned that our sons had played lacrosse against each other this past school year. There must have been a hundred people on the ferry and at least 30 dogs, and for that 20 minutes across the Cape Fear River, it was perfect harmony. I felt like I was in the middle of a novel and the adventure was about to unfold.

As we approached the island, I immediately noticed how preserved everything seemed! The gorgeous beach homes all appeared to be strategically placed within the trees and the shoreline. It was almost as though they had been there all along, as part of nature. You could see families and friends sitting out on their decks, having drinks by the water, riding bikes, and enjoying the beauty surrounding them.Once we docked and disembarked the ferry, lines of golf carts were waiting with drivers to load up luggage and families and take them to their homes. If you are just visiting for the day, or want a cart to keep for your stay – there are cart rentals available hourly or weekly. So, Shadow and I hopped on a cart and set off to explore. 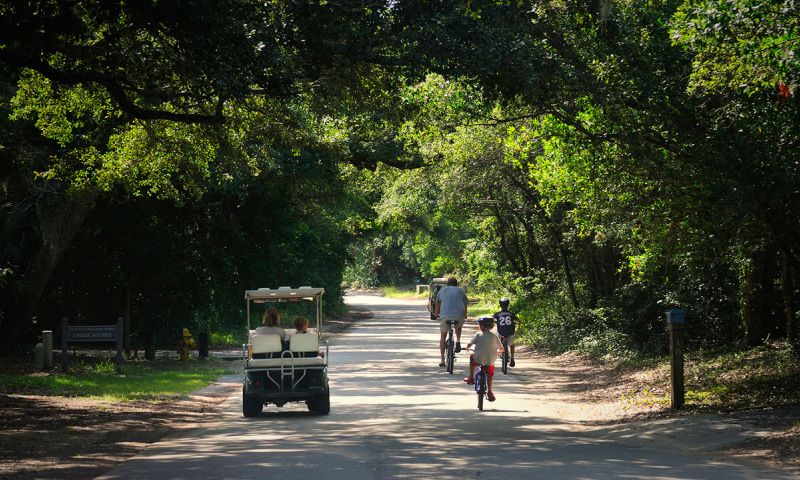 The first thing I noticed was the beautiful tree-lined paths, each taking visitors to another part of the island.

Bald Head Island stretches 14 miles of pristine shoreline and maritime forests all able to be explored by golf cart, by bicycle, or on foot! While you won’t find any shopping malls, chain restaurants, or stop lights – Bald Head Island has no age limit – there are plenty of fun activities for children, families, couples, girl’s weekends, guy’s trips, solo travelers, and seniors throughout the year. During the summer, Bald Head Island Conservancy offers children’s camps that feature arts and crafts, science fun, crabbing, shelling, and learning about the island’s unique ecosystem. The Shoal’s Club offers family fun, volleyball, and bocce ball. Families can also join the Sea Turtle Patrol and search for nesting sea turtles. Efforts to protect sea turtles on Bald Head Island date back to 1980. Since its founding in 1983, the BHI Conservancy has coordinated and sponsored the Sea Turtle Protection Program, in cooperation with the North Carolina Wildlife Resources Commission and the National Marine Fisheries Service. Bald Head Island has been designated as an “index beach” by NMFS, making their sea turtle nesting activity and protection program nationally recognized.

Want a better view? Climb “Old Baldy”. Old Baldy is the oldest standing lighthouse in North Carolina, recently celebrating 200 years! Built in 1817, the most important purpose of Old Baldy was to mark the Cape Fear River entrance for the maritime sailors. It was originally built of red bricks and covered with stucco. In the early days, the innkeeper would whitewash the lighthouse every two years. The whitewash protected the stucco and when it was deactivated in 1935 large pieces of stucco began to fall off. Occasionally someone would come along and patch the lighthouse with new stucco, however, they did not use the same stucco that was used in 1817. Today Old Baldy resembles an old patchwork quilt – in 1817 it was completely white. 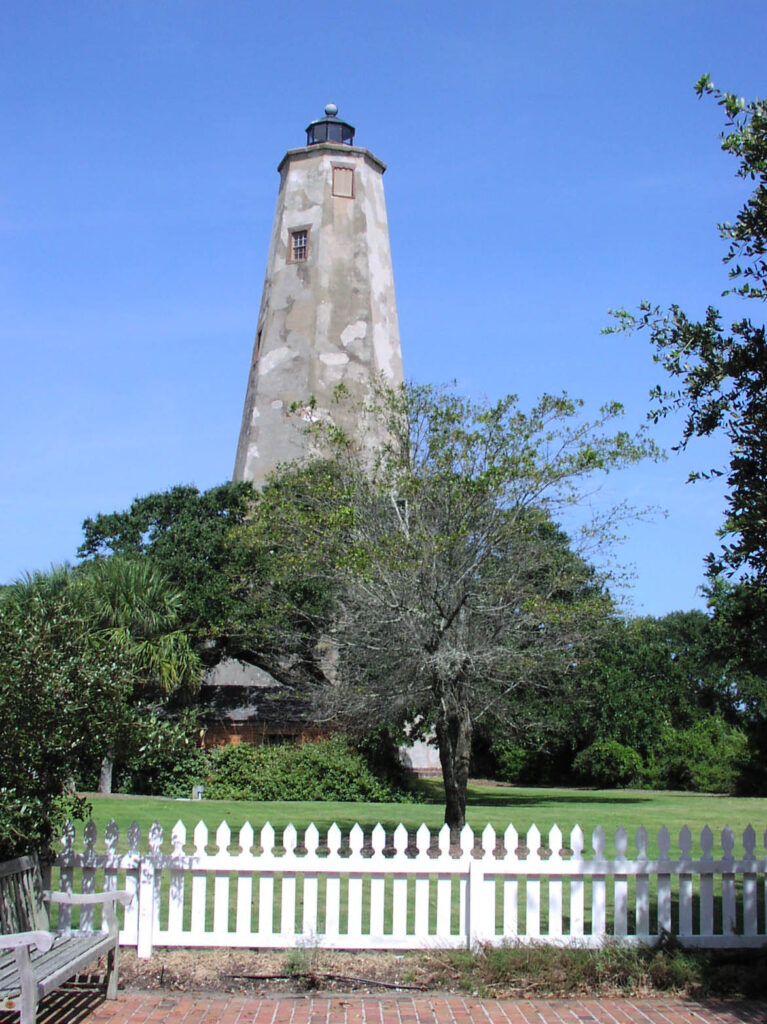 While some guests may not desire climbing to the top of Old Baldy (it is a workout), they will likely enjoy the Smith Island Museum that takes you back in time, through the history of Bald Head Island. Did you know that Bald Head Island was the home to a British fort and hospital during the Revolutionary War? In the early 1900s visitors came to the island to hunt wild pigs! Take a tour of the island and reminisce of Bald Head Island from its first appearance on maps in the 1500s to the development of the island in the 1980s.

Sometimes we need to just get away alone! You can visit the adorable island library, grab a book and curl up in the sea oats or you can relax at the Island Retreat Spa and Salon for a little pampering – take some time for a pedicure, facial, or massage to recharge! The Maritime Market is also a great breakfast place for early risers of all ages – a few local favorites are the seafood omelet and crepes.

Grab your gal pal and enjoy a tennis match at the Bald Head Island Club or meet the fellas at the golf course for a few holes – before taking a bike ride with your Sweetie to dinner and drinks at Mojo’s on the Harbor. Rent a couple of kayaks or a canoe and explore the island view by boat. No doubt about it, everyone can find something to love on Bald Head Island. Even if you keep your schedule open, taking in the stunning scenery will be enough excitement, making it a trip you will never forget. 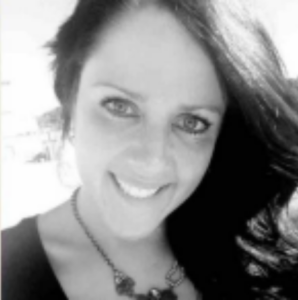 is a journalist and writer known for meticulously reporting literary non-fiction. She uses a creative approach to documenting southern lifestyles, regional interests, outdoors recreation and gear, local proprietors, and travel. She lives in Emerald Isle, NC with her three children and publishes The Pamlico Porch, a publication about southern hospitality, travel, and history. 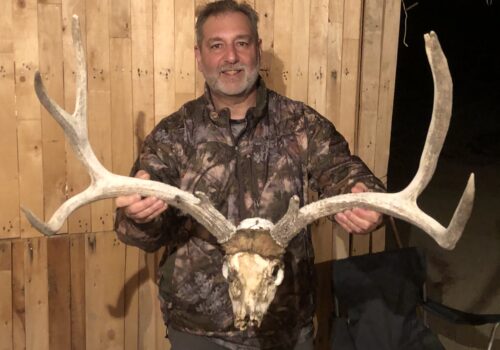 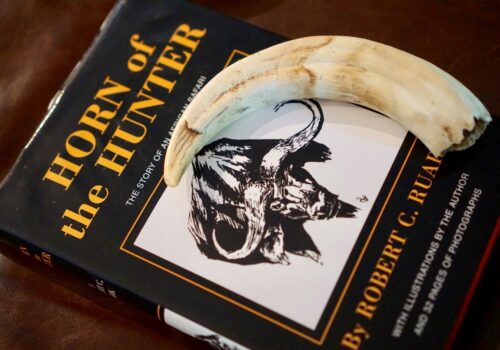 Horn of the Hunter 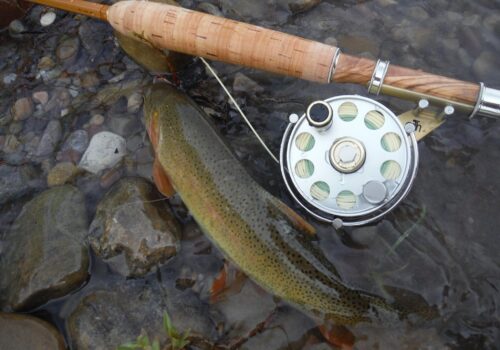