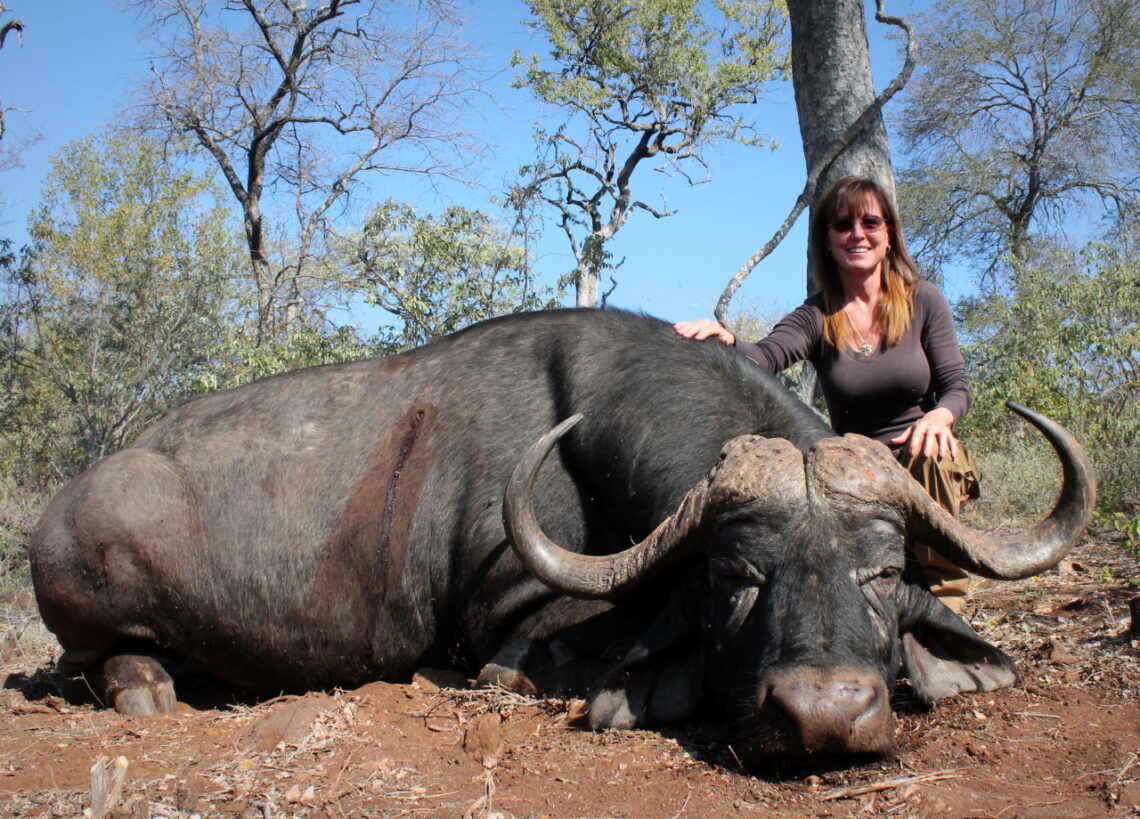 Its now Saturday, May 28th. With one successful hunt now under our belt, our energy was renewed to continue our buff hunt. Even better, a new group of  daggas has been detected having moved into the area. As we track them, we see that they are looking for water but hitting the pools that have now dried up. So, they must be somewhat familiar with the area, but have not been here in a while. Eventually, they will find water and based on the tracks, Rad and Jacques know where they are headed.

As we head to the most obvious pool of water, Tools taps the top of the bakkie. Rad stops. A bull has been spotted lying under a tree. Rad glasses. He whispers for me to quickly get out on his side of the vehicle. We move swiftly and quietly to unload the equipment, a bullet is chambered. Then Rad, Jacques, Tools and I cut into the heavier brush behind us. We move around and forward trying hard to remain hidden. Rad then moves into a more open area and sets up his wood sticks and places my rifle on top. He motions for me to get ready to take a shot.

Rad continues to glass as I get into my scope. I now see the bull and he is standing, facing us, but he remains partially hidden behind the tree. His boss and horns are covered by the foliage of the tree so we cannot get a visual. Clever fellow. The buff turns facing the other direction, but he is still hidden. Finally, he moves out enough to our right that his boss and horns are in full view. This is the one we want.

The buff then moves off to another tree a little back and to his left. I won’t take a moving shot. He’s hidden again. Then he steps out giving us a frontal presentation. After my last experience hunting a buff with a bad outfitter, I’m not comfortable with this shot, not trusting my own abilities. Rad reassures me there is no pressure to take a shot I’m not comfortable with. Then the buff does an incredibly odd thing. He lies down under this second tree. Rad is floored!

Rad tells me to grab my rifle, he takes the sticks and we move over to our right. I get back into my scope again. As we move, the buff stands up. Now it’s a stare down. I wipe the sweat from my hands and breathe. The wait is for my benefit. The buff finally moves rapidly to his left, but back into heavier bush. I expect him to hit the bush and to disappear, but he stops, turns and watches us.

Another stare down begins. Then the buff moves forward out from cover and gives us a quartering frontal presentation. He stares. Rad again reassures me that if I’m not comfortable with the shot. I ask him, “Are you ready?” I know once I pull the trigger the buff is going down one way or another. I know I can do this. Rad says, “Yes”.

My shot rings out puncturing his left shoulder, lung and heart. He buckles then turns to run up into higher ground with heavier bush. I reload and off-hand shoot again, this time it hits the back of his lungs on his right side. I reload again, this time to hit hair as he moves into the bush. The shot hits his right hind quarter. The buff only makes it a few yards and stops and stands there. I reload my rifle, safety on, and we run to get in closer to the bull. We now stand just below him on his left side. Again on sticks, I take another shot right behind his left shoulder. He drops. We move around to his other side. Then the death bellow begins. Its a sobering moment and I cannot help but lower my head.

As we begin to get a closer look at the animal, we notice a gore wound behind his boss. It’s seriously infected, the skin becoming detached from the boss. At first its believed to have been the result of snare. But closer examination shows that this old boy is a warrior. Two more wounds are found under his right eye and heavy scratch marks down his neck evidence the tussles he’s been in. His boss as well. 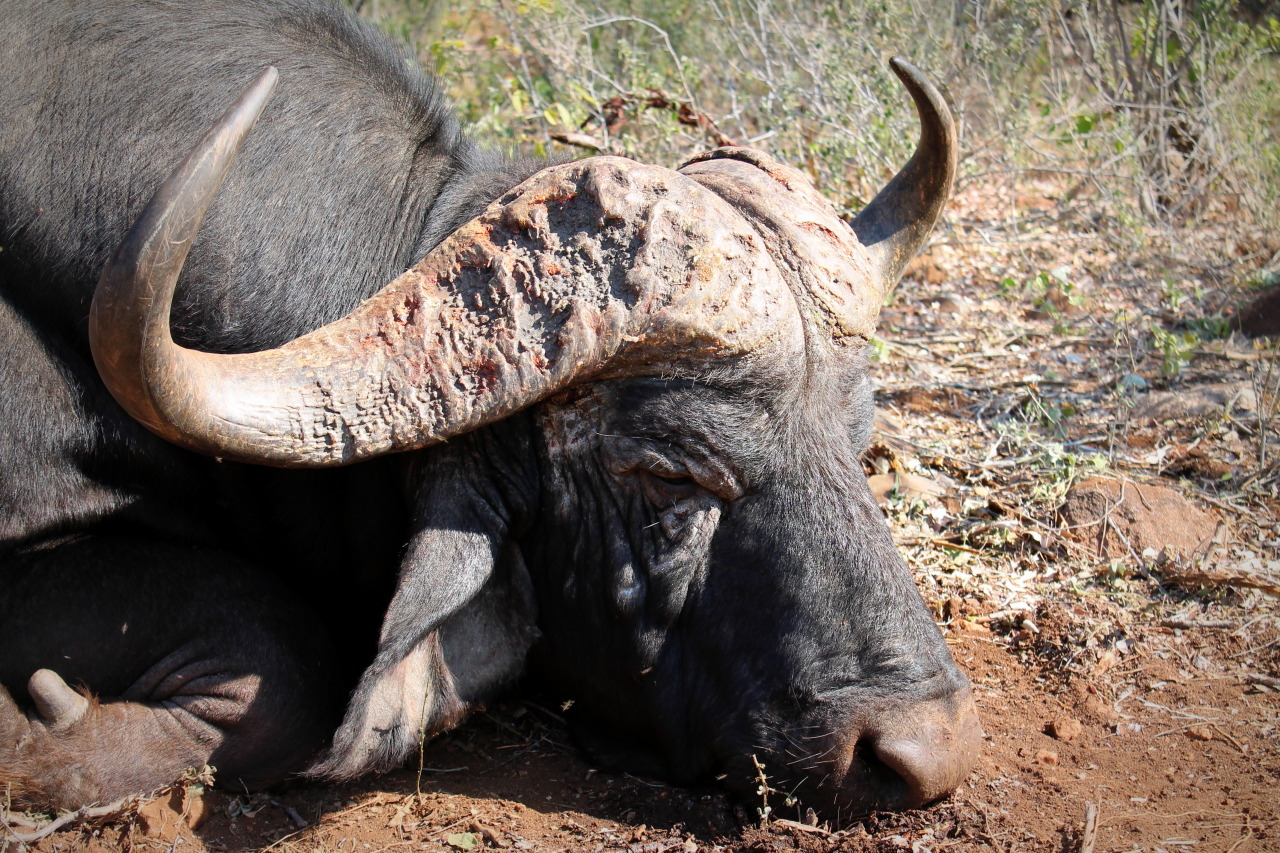 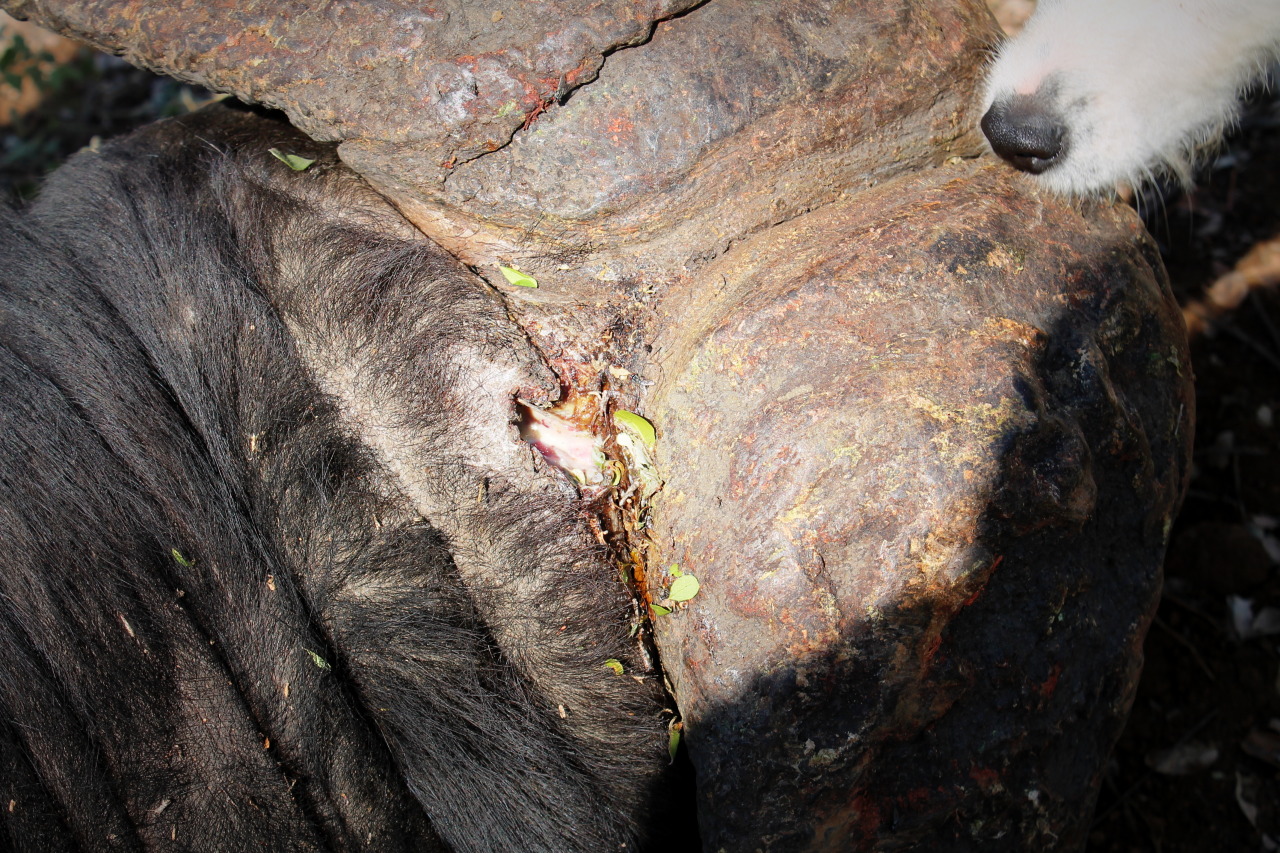 Everything happens for a reason. I am told that had nature been allowed to take its course, the infection would have eventually set in to his brain and/or spine. It would have been a slow horrible death. This was my bull. 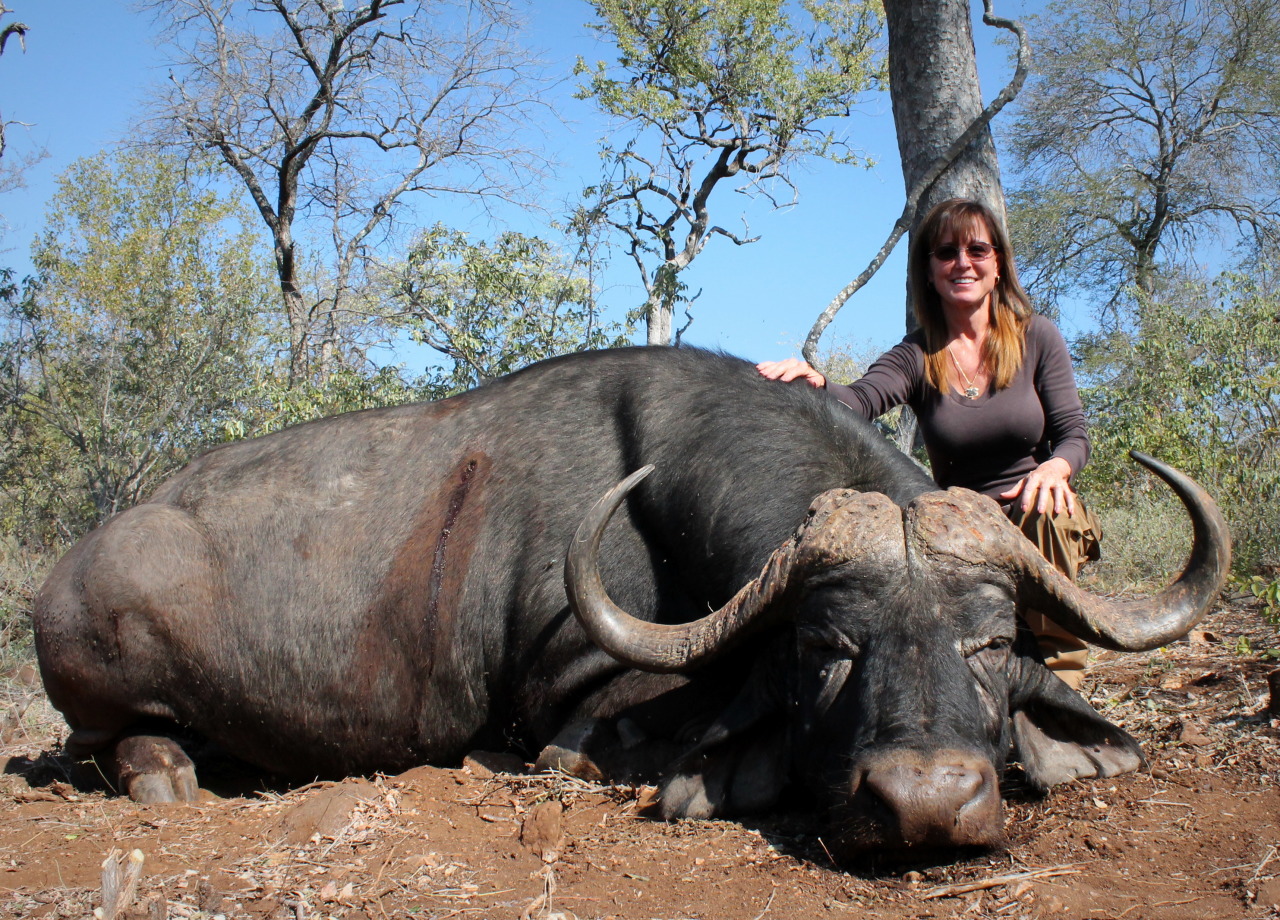 Once the photos are taken, field dressing of the animal begins. Two armed anti-poaching rangers had appeared out of nowhere and assist in the process. I learn that all the meat from the buff and sable will be sold and the monies are to help pay for the anti-poaching efforts in the area. Hunter dollars once again at work to ensure animals in the wild survive. 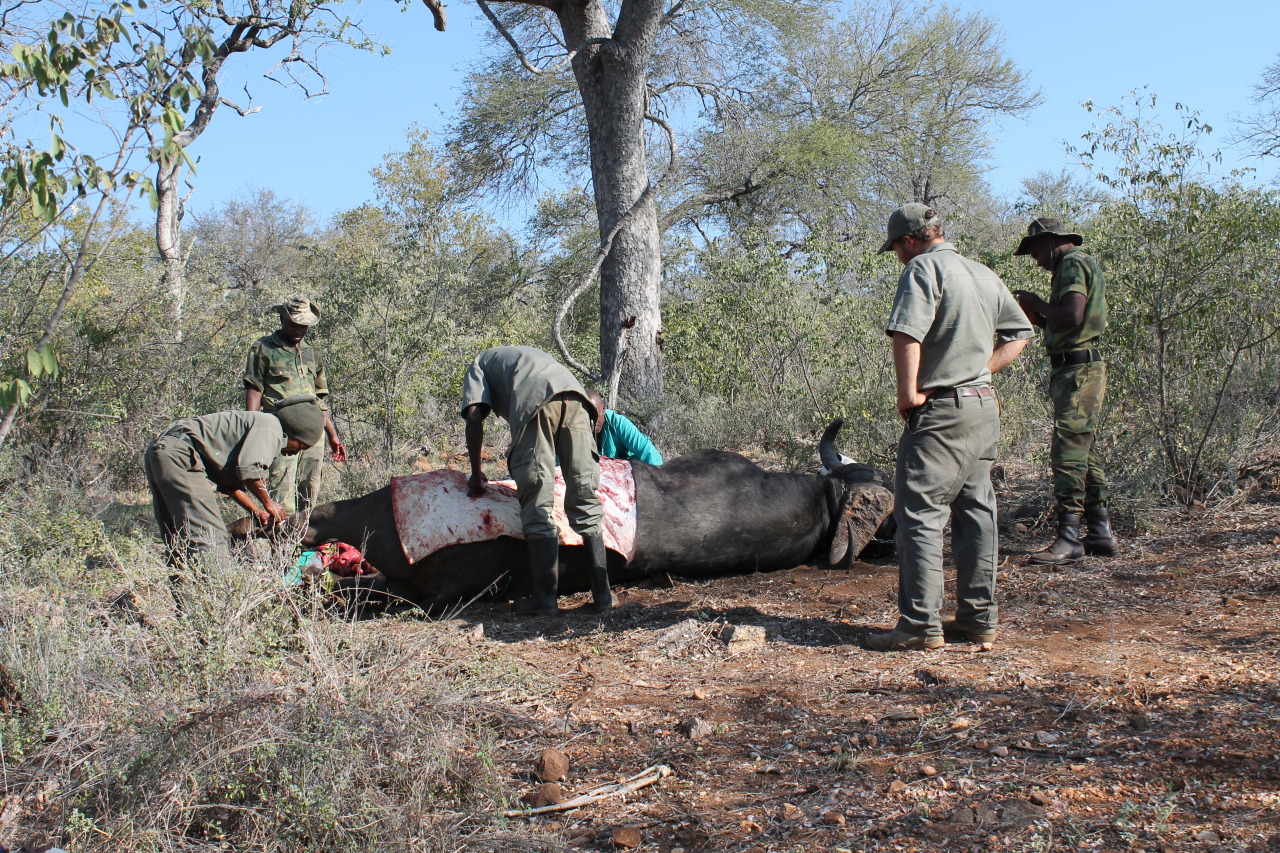 Now that the Cape buffalo and common sable hunts are complete, it’s time for me to move on to new hunting grounds in Umkomaas. That long journey begins tomorrow, and it is where I will join the others. But at least I have the sounds of the lions, leopards and hyena for one more night.  ~ Christina 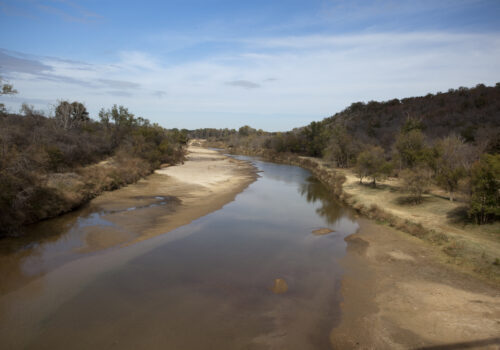 Goodbye To A River 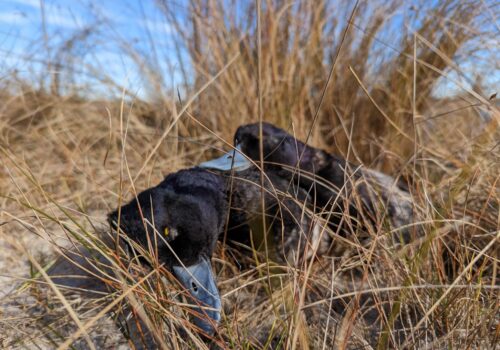 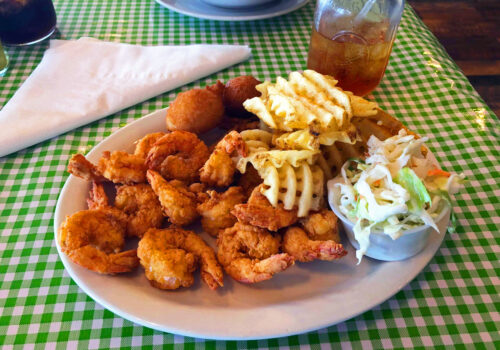